How to remove front and rear bumper AUDI A8 D3

The bumper is removed along with the grille (beard).

-under the hood,  Unscrew the upper bolts that secure the radiator grille and upper bumper to body.

-in the lowest part of the bumper along the entire length and pull out the caps that secure the protection of the engine and wing flaps.

-in the wheel wells, Unscrew the screws and pull out the rivets that attach the fender liner to the bumper.

-now for the hard part, you need to Unscrew the three nuts on each side that attach the bumper to the wings. Will need a head 10 with an extension cord (about 30cm) and a ratchet. Move the fender liner aside  and Unscrew the nut. In some models depending on the engine under the wing can stand the washer reservoir or  charcoal filter, which complicate access to the nuts.

-pulls off the bumper with the side latches.

-gently tighten the bumper itself (it is advisable to do it alone, so as not to scratch the paint on the wings with pins).

-you can now unplug the connectors from the fog lights.

-if there is paramilitary disconnect the hoses from the injectors and close them with stoppers that from the reservoir was leaking fluid. 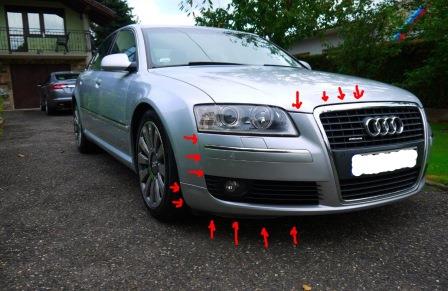 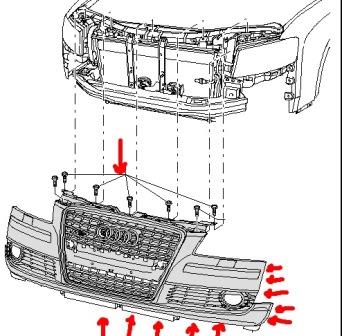 -in the wheel arch, Unscrew the three screws on each side (to remove the wheels, use a ratchet with a nozzle).

-in the lowest part of the bumper, Unscrew the four screws.

-remove the side trim in the trunk (need to access the tail lights).

-from the trunk, under the rear lights, you need to loosen the pad (in the last picture will be more clear). To do this, turn the screw on the pad two turns, the left side, counterclockwise on the right side clockwise.

-if you have sensors , you need to disconnect common connector.

-edge of the bumper remove guide.

-pulls the bumper on yourself (better to do it together not to scratch the paint on the wings). 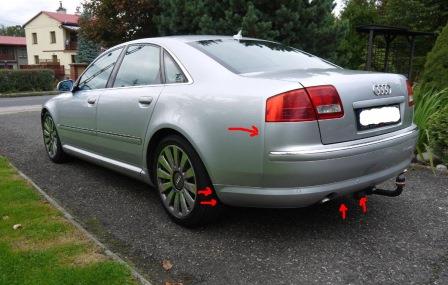 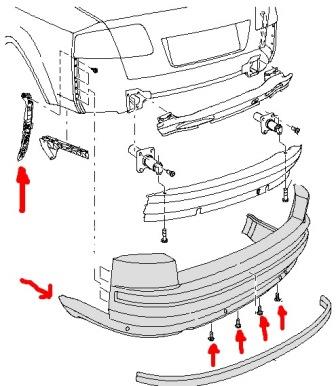